It has been five and one half hours since Santa launched and his A-Team of reindeer has traveled the distance of the world already. Concern is growing at the North Pole that they might need to rest.

“I just got off the radio with Santa,” Elf Victor said. “We should be making a change soon. We’ll put the B-Team in there and give the A-Team a chance to eat and get a little rest before they re-join Santa later today.”

This is perfectly routine. Santa is very careful not to overwork the reindeer. The first leg of delivery operations takes place south of the equator, where it is summertime and thus very hot. So a good break for them is in order.

Santa is headed back north at this time. 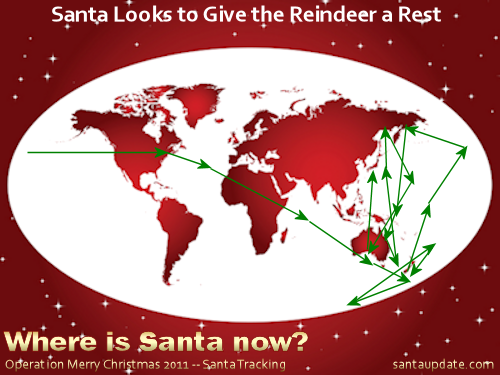