We haven’t received confirmation of any Santa deliveries in Japan but we are receving multiple reports by email, fax, phone and radio that Santa’s sleigh has been spotted in the skies over Japan. We’ll keep you posted.

Meanwhile, at the North Pole it appears that things are not improving in Santa’s Workshop.

“The list is just never ending,” said Elf Bernard. “I don’t know if Santa just took a bunch of kids off the naughty list or just found more kids hidden away somewhere that he didn’t know about or what it is but late this morning he gave me a really long list to add to production and we’re trying to plow through it. We’ve got some supply problems, though. We’re running out of boxes and fasteners. We’re doing all we can to come up with fixes but these things slow down production. I just hope we can get it all done. If Santa slows down a little bit we’ve got a chance of catching up.” 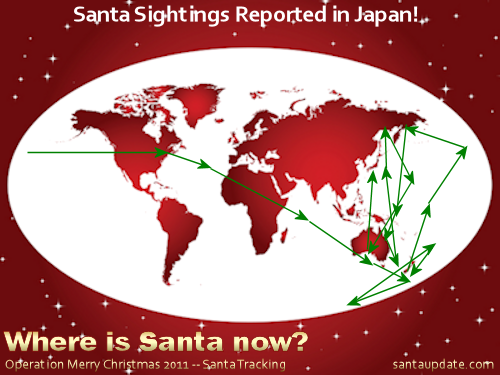 Santa Looks to Give Reindeer a Rest Santa Heads into Siberia?
Scroll to top