Santa continues to zig-zag through the South Pacific and along the Pacific Rim, visiting people wherever he can find them. He tells us via the sleigh cam that he is heading back north but will again turn south to cover more of Australia.

“I would have stayed down there in Australia but the further inland I went I kept running into kids who weren’t in bed yet,” Santa said. “So I thought I’d give the kids in Australia a little more time to get snuggled.”

Meanwhile we’re hearing from dozens of freighters, cruise ships and military transports of Santa’s visits to them. Don’t forget that St. Nicholas is the patron saint of sailors, as well as children. Many folks are fascinated by the idea of Santa landing his sleigh on a moving ship but we assure you it nothing unusual. Santa wants to remember those women and men long at sea so they do not feel forgotten. 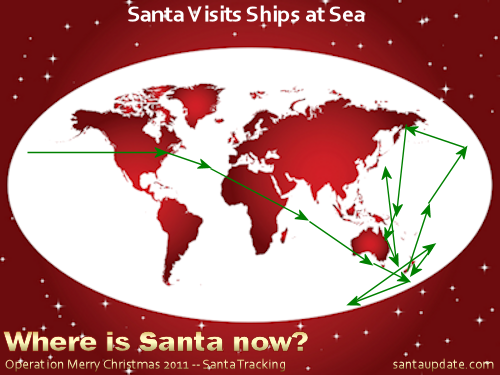