This is a surprise: the first visits from Santa come from the point furthest away from his home: the South Pole.

“Therea aren’t a lot of people there, much less a lot of kids,” Elf Billy said. “But they are important to Santa and this stop makes sense. It is about 1am on Christmas morning there now and this leaves Santa in a good position to head north in almost a straight line. I’ll predict Santa now heads north.”

We shall shortly see. We’re just relieved that Santa has finally made a delivery. He’s officially two hours behind his schedule from a year ago and he’s got a lot of world to cover.

Meanwhile, here at the North Pole folks are continuing to work. It is a weird feeling because at this point the workshop is shut down. But all the lights remain on there at this hour and the elves in the Wrapping Department are going crazy as usual. 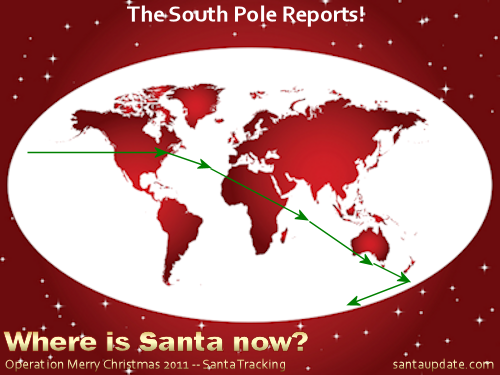