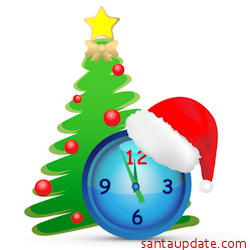 At exactly midnight North Pole time, Santa walked into the workshop to keep alive a tradition that started centuries ago. He walked over and removed the cover from the official North Pole countdown clock and pushed the button turning the clock on for the first time since last Christmas. Santa then hit the switch to raise the clock high above the workshop. The workshop was alive with activity at the time but everyone stopped and looked up as the clock reached the highest peak of the roof. Santa didn’t have to tell them what the raising of the clock meant. They all knew. Operation Merry Christmas 2012 has entered its homestretch. There is only one month left until Christmas day.

I tracked down Elf Bernard and asked him about the clock. “There have been many clocks over the years” Bernard told me. “This one was designed about ten years ago to make it a little bit easier to see from the farthest point of the workshop. It’s not real fancy. It’s just a square shaped box with a digital display on each of the 4 sides showing exactly how much time is left until Christmas day. Then at precisely midnight every day from now until Christmas the clock will lower a little bit closer to the ground until Christmas day when it will land safely back in its box.”

A little bit later in the morning I managed to get a few minutes with Santa himself to ask about the clock. I told him that I was confused as to why the clock lowered itself everyday. Santa kind of laughed and said that aspect has confused many people over the years.

“The clock lowering is a metaphor” Santa told me. “It signifies the weight on all of our shoulders getting a little bit heavier every day we get closer to Christmas. The clock is there to remind everyone including myself that while there is still time for fun and games, there are millions of kids all over the world counting on us and the last thing we want to do is let the kids down.”