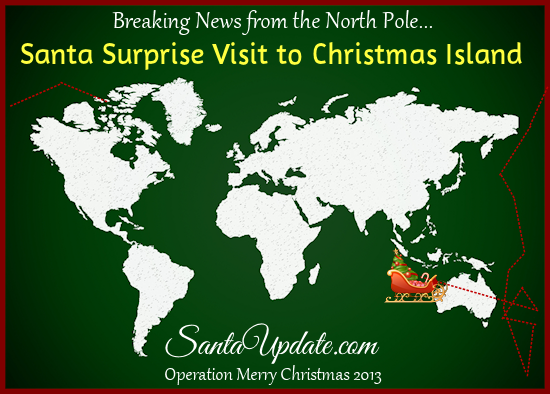 Wow, word coming from Christmas Island, north and west of Australia, indicate that Santa has been there.

Santa told us to expect the unexpected and so far his flight pattern this year has been erratic indeed. While the clock may show Christmas morning on Christmas Island technically we were not expecting Santa there so soon — in fact, we expected his stop there would occur hours from now.

Why is Santa being so unpredictable in his movements this year?

“Santa knows things we don’t know and can’t know,” Elf Billy explained. “He knows the kids that live there, what they need and what they are up to. My guess is that Santa went to Christmas Island now because they were ready for him, more so than folks in New Zealand and Australia. That doesn’t mean Santa isn’t going to those other places. It is just a matter of when. Santa will get to everyone.”

Keep your maps up to date, kids. This is one wild ride by Santa this year and who knows where he will end up next.