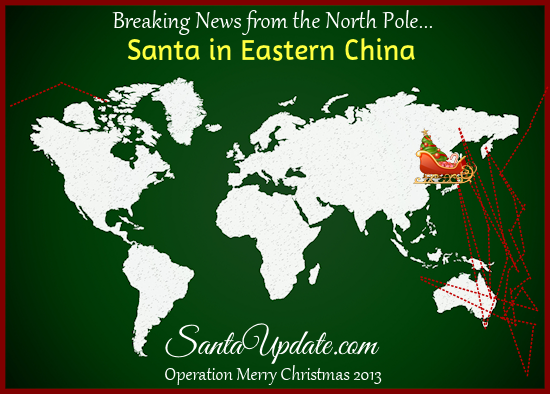 Santa has moved on fast to Eastern China, where he continues to work very, very quickly.

As we told you a while ago we expected those extra sleighs that were used in North Korea as decoys for Santa to be returning to the North Pole. Well, they haven’t shown up. So I asked Elf Agent X about them and he laughed at me.

“What sleighs?” he said. “We didn’t have sleighs there. Are you kidding? Those were halograms — the North Koreans were shooting at shadows. Santa would never send elves into harm’s way like that. We sent a team of elves there to set up halographic projectors more than a week ago. The tough part was keeping them hidden. We were lucky to have good cloud cover so they looked very, very real. The only sleigh there was Santa’s!”

But how does that explain the sleighs shown on radar?

Well, I’ll be darned. That Santa is one sneaky dude!