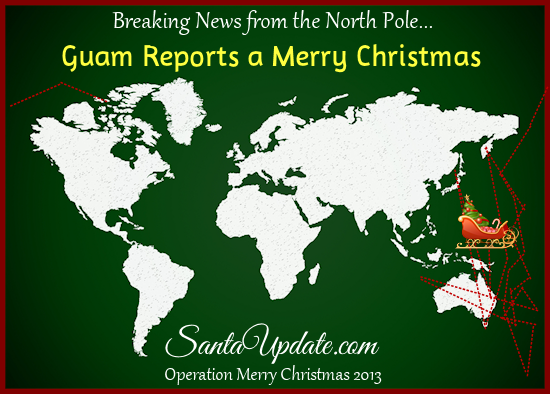 Guam is reporting a Merry Christmas at this moment as Santa and team have shot back north in a blazing display of power and speed. Santa is moving faster than ever.

The eyes of the world, however, are on North Korea and what Santa may be planning to do there. We have reports of several sleighs from the North Pole converging on that area and of military units in North Korea mobilizing. Several countries have sent high level alerts to the North Pole cautioning Santa on his approach to North Korea.

I spoke with Elf Gloria, The North Pole Commissioner of Christmas Tradition, and asked her if some areas of the world were too dangerous for Santa Claus to fly. She was very candid. “Santa wants to visit everyone that wants to see him. There are many good people in North Korea who want to see Santa so he shall visit them. Nobody can stop him. Santa always asks for permission and he likes to get along with politicians and keep local laws. But charity comes first and I know Santa needs to visit some very good people in North Korea who need help with things like food, water, blankets and emergency supplies at Christmas. He’s going. That’s it.”

Wow. She sure was ready to answer that question. It appears we have a show-down of sorts coming in North Korea. Keep your radio tuned to Kringle Radio and right here to SantaUpdate.com as we expect Santa to visit North Korea sometime in the next few hours.