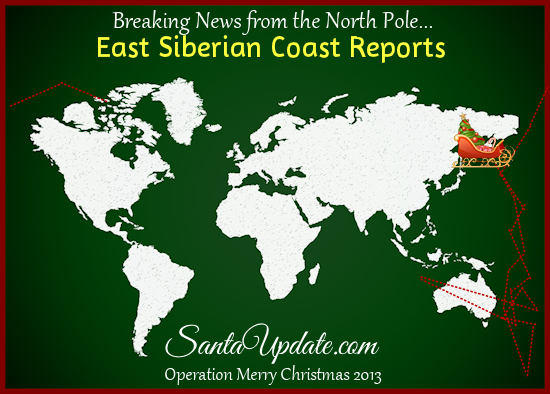 The eastern Russian port city of Magadan is reporting a Merry Christmas at this hour, marking Santa’s first visit to Russia of this flight.

Tracker at the tracking center were excited to mark that location on that map. They were betting that Santa would not get there for at least another hour.

“All I can say is that kids in Europe might want to be thinking early bed time,” Elf Royal mentioned to me via email a moment ago. Elf Royal works the bedtime warning list as it comes in from Santa. He knows when kids around the world should be heading to bed. “Santa is making great time. This could be a record breaker, I’m telling you. He’s in great shape!”

You wouldn’t believe that statement if you read some of the mail we’re receiving. One concerned father in Australia is sending us email about every 4 minutes, wondering if Santa will make it on time.

Relax, Mr. Reeder. Santa will be there. Take a cue from your kids and go to bed. Santa is on the way.