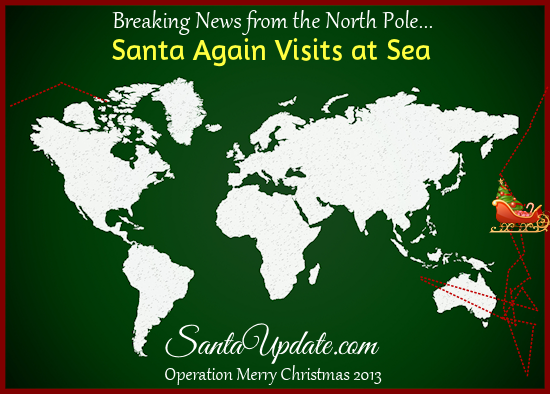 Sailors and seamen working at sea on a dark Christmas night often express shock and surprise if they are lucky enough to see Santa visit the ships at sea. One captain, who has worked Christmas at sea for the past 37 years says Santa has never failed to deliver to him.

Captain Jean Despain, of France, has said Santa has visited him while he has been at sea all over the world. Today he is in the North Atlantic far off the coast of Siberia and he reported in to the North Pole just a minute ago. “It is cold here but Santa has warmed everyone’s hearts” he reports. “He gave us hot cocoa and gifts. I don’t know how he does that on a sleigh. He must really be Santa Claus because the magic always happens on Christmas.”

We have lots of mail expressing concern coming in from places like Tokyo. Patience, my young friends. Santa will be there on time. Please go to bed if you live there.