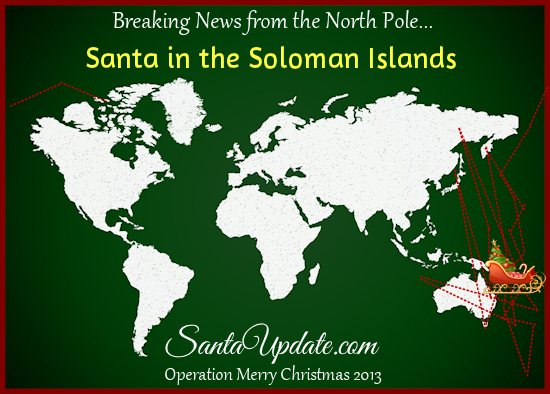 Santa has dipped south yet again in an amazing burst of speed. The Soloman Islands report a Merry Christmas while we receive continued weird reports coming from North Korea. Have you heard the latest over on Kringle Radio? I’ll try to get that report for you in my next update. Lots of strange things going on in the skies of North Korea as we speak and Santa isn’t even there yet.

Meanwhile, a question from Randy S. of Huntsville, Alabama USA. He wants to know if Santa has guns on the sleigh.

The answer is “NO”. Well, except for toy guns that Santa might give as a gift. Santa is a peace lover. The central message of Christmas is peace. All he hauls is love and good cheer. He is not armed. If a country tries to attack Santa’s sleigh — and yes, it has happened before — Santa will just avoid visiting there. He isn’t interested in a fight.

Just so you know. Stay tuned.