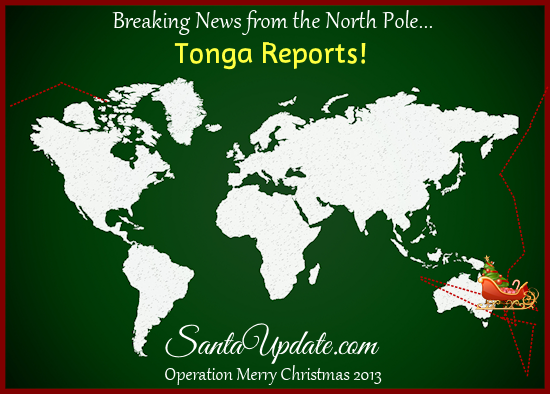 The island nation of Tonga is celebrating the visits of Santa Claus as this moments, our first reports of Santa’s presence there was confirmed by spotters just moments ago.

“Santa is spending a lot of time in the Southern Hemisphere and that has me a little concerned for the reindeer,” Elf Victor told me a minute ago. “It is warm there and the reindeer are still pulling a very heavy sleigh in that heat.”

Indicators in the tracking department show that the reindeer are not tired. Elf Victor is still very concerned for them. We are told that Elf Billy will ask Santa to check on them with his next stop. Several teams of reindeer stand ready to relieve if the call is made by Santa to do so.