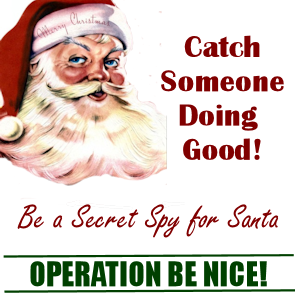 Too often in the anticipation of Christmas there is a focus on those who are “naughty”. Some even think that Santa keeps a list of kids who misbehave (he does not).

Instead of worrying about such stuff why can’t we just tell Santa about someone being good? Do you know someone who has done something nice, has helped another person or done a good deed?

Tell Santa about it!

Santa would much rather hear good news than bad news. So send him some good news!