We talk a lot about the new things Santa does all the time. Santa uses new technology and is constantly improving on things. But some times Santa insists on doing things the old fashioned way.

One of the big things Santa likes to see are folks who track Santa the “old fashioned way” — using a real paper map or a real globe. 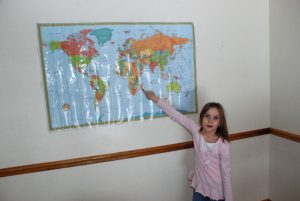 Santa believes that using a map allows one to learn a lot more about the world. He says that a map helps people to understand time and distance.

Santa says that when you take the tracking experience off the screen of a computer or a phone you open your mind to a whole theater of Christmas imagination.

That is why on Christmas Eve the news we present you here includes not only maps but also sound from North Pole Radio News. You’ll hear it every time you come to visit our site on Christmas Eve.

Santa says that one of his favorite things to see when he visits a home on Christmas Eve is the map on the wall that show the markings of Santa’s travels.

The photo above was sent to us a few years back from a family that has tracked Santa with us for many years. Click on the picture and take a look at their map. You can tell that it is one of their regular well-used Christmas decorations. They used yarn to track the travels of Santa.

Santa just loves to see this.

Sometimes, when Santa has time and is in a home on Christmas and sees a map on the wall, he will sign it. He wants those who live there to know he appreciates those who track him.

There are many people and many kinds of ways to track Santa.

Santa would prefer you track him as an elf. That’s right — become an elf! As a tracker elf you help Santa get around the world on Christmas Eve. What better way could there be to tracking Santa?