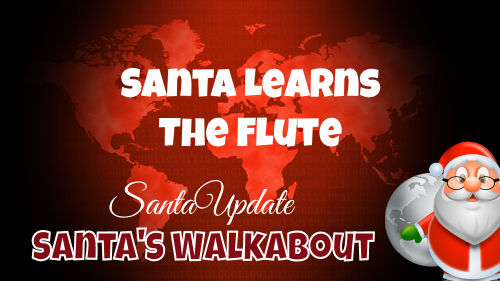 (Special to the North Pole) — Hello from somewhere in the North Atlantic. As I mentioned in my last letter Santa said I would be seeing plenty of the ocean. For the first time in my life I’m actually on a ship, exploring the seas of the north aboard a small fishing vessel.

It was in Santa’s plan all along. We made our way to a tiny fishing village known as Comfort Bright in Newfoundland. There we boarded a ship captained by a man known as Rusty Mann. He has a crew about about a dozen fishermen and they troll the North Atlantic for weeks at a time.

It’s cold but the ocean is beautiful. I thought I might get sea sick a lot because the Atlantic, especially in the winter, can be pretty crazy. But actually things have been fine with me. I have not been sick at all.

Santa, of course, is doing terrific. He told me he does not actually have a lot of experience with sea fishing, so he is very happy to be here. He is old friends with Captain Mann. Santa says he is learning a lot from him.

That would include learning to play the flute.

In the dark hours of the night, after the day’s catch has been processed, Captain Mann will host everyone for dinner and for storytime.

Captain is, like Santa, an expert storyteller. He has been all over the world with his boat and he has seen many things. A few nights back he told a story with music — using a flute to share tunes he said he learned from a native tribe of folks he might on a Caribbean island. Santa just loved the sound of that flute and asked Captain Mann how he could get a flute like that and learn to play it.

Well, it turns out that Captain Mann has a great many flutes and he gave one to Santa. For days he has been learning to play it. Santa has just about mastered how to play Jingle Bells on that darn flute.

This is the thing about Santa. He just loves to learn new stuff. And he loves to take what he learns to use it in his own work. Over the course of learning the flute Santa has studied how it is made and he sent a message back to the North Pole to let the workshop know that he wants to get into producing flutes to give to children as gifts. Santa said learning the play a wood flute is actually pretty easy and he thinks some children will like it.

So, who knows? You might get a new flute for Christmas!

Anyway, while Santa was in contact with the North Pole he found out about this awful virus that is circling the globe. Santa is very concerned about it.

The North Pole is concerned too. They are worried that Santa might get this virus. They talked about it for a long time.

But Santa has decided to stay on his journey for now. He feels pretty safe in the middle of the ocean and he thinks it gives him time to figure out where he should go next. Santa does not want to get the virus but at the same time he wants to help with the situation if he can. So he is working to find out where that would be and how.

I think originally Santa was going to ride this boat perhaps towards Iceland. But now he’s not sure. I know he is talking with Captain Mann about where the boat is headed and what our next steps might be.

So who knows what is ahead on this little adventure.

All along I have told you that Santa has been in contact with the North Pole. Due to this virus Santa is now receiving updates via radio from the North Pole on a daily basis. They are doing a good job of letting Santa know what is going on out there. I think in my next letter I may have some things from Santa to share with you about this situation. He is concerned about how much this is affecting all of you and Santa has learned that many of you have been writing in with questions about it and how the North Pole will respond.

So stay tuned for that.

In the meantime, please do everything you can to stay healthy. Listen to your parents, your school and community leaders and be safe!

9 Months Until Christmas
Scroll to top