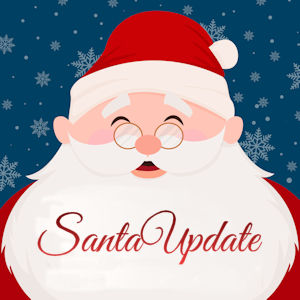 Tracking Santa by text has opened early this year. JingleKringle.com has launched the service much earlier this year due to requests from site visitors.

As with other North Pole features this one has been revised and expanded.

If you visit Jingle Kringle and sign up there you will be getting updates after Santa launches very late in the evening on December 23rd and during scheduled times on December 24th. The site has a text schedule posted.

In addition, a new feature this year from Jingle Kringle, is the availability to get a text every time new Santa Updates are posted here. You can activate that service by texting the word SANTA to 844-448-1532. As always, this is a free, non-commercial service from the North Pole.

These are the first two North-Pole-by-text features so far to be announced this year. Other services, particularly tied to North Pole Flight Command and Tracker Elves, are still being worked on for the upcoming season and will be announced via those websites.

Santa, by the way, has driven the project to get these services to you earlier this year.

New Elves Expected by the Millions