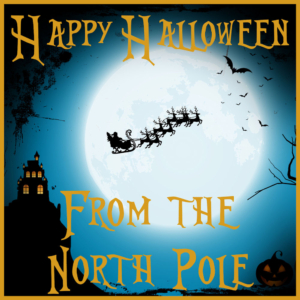 Today is more of a traditional Sunday at the North Pole with families gathering for quiet celebrations.

Sunday, as you know, is a day off and a day of rest at the North Pole. The North Pole chapel is where most elves go to attend church services, even Santa and Mrs. Claus go there when they are in town.

But most are smiling today after the events of Halloween yesterday at the North Pole. The North Pole Halloween party was a huge success with record attendance.

The costume contest was won this year by Elf Melanie of the Tracking Department at North Pole Flight Command.

Elf Melanie is a map technician who serves the sleigh coordination team with both paper and electronic maps. She is one very talented elf. For her costume this year Elf Melanie had a brilliant design – well, actually several of them.

She had strapped to her back a large tablet that had a computer map displaying on it. Anyone could tap on the map that had pumpkin icons placed in different countries on the map. If you pressed one of those pumpkins her costume changed in an instant to reflect something from the culture of that country. It was stunning.

Not only were Melanie’s costumes diverse but they were detailed. She was hands down THE best costume at the party and nobody else was even close.

All the other traditional activities of the party came off well. The limbo contest, bobbing for snowballs and even the reindeer buck-a-roo rides were all well attended.

But the big event, the finale, the traditional North Pole Halloween Party Food Fight, was of course the most popular activity of the night — as it usually is.

Clean up is always a big deal and right around the last hour or so of the event, when they start to clear away the dishes and other things that might break, Santa started to drag into the room a really long hose. This is not unusual to see.

The food fight happens every year and the Halloween Party Committee sets up the room for easy clean up. They move things out they don’t want damaged and they hang plastic over the walls and windows in preparation for all the flying food. They really do a great job making sure things are safe and easy to clean up afterwards.

So seeing Santa come in with a hose is not that big of a deal. Folks just thought he was helping to get the clean-up ready.

But before anyone had a chance to even fire off a Twinkie Santa turned the hose on and it wasn’t shooting out water – it was sending a projectile of Kool-aid.

He soaked most elves in sticky Halloween-orange Kool-aid before most had anything to throw. And it started off the craziness that lasted for well beyond 30 minutes.

Naturally, the Halloween Party Committee made sure there was plenty of ammunition available.

While Santa had the hose and did a great deal of damage he paid a price because he soon was the largest target for lobbed cupcakes, pies and water balloons filled with eggnog. Santa got blasted pretty good and was quite the mess by the time it was all over. But he could not stop laughing because that hose never left his hands.

Mrs. Claus tried to help Santa by coming in through a door in the far corner of the room.

She appeared to be pulling in a large wheeled cart that had squirt guns on them. Elves rushed her to grab a gun to start firing back at Santa – but all the guns were empty. So Santa had a large group of elves in a corner — unarmed as it turned out — and he unloaded on them.

The Bakery Girls – a team of all girl elves who helped prepare the pies, cookies, pastries and cupcakes for the party – quickly hooked up a hose to a whipped cream vat that was in the kitchen. Their hose was just long enough to shower Santa with globs of whipped cream while he was hosing down the elves in the corner.

The Bakery Girls really surprised Santa and got the award at the end of the fight for the Best Elves Under Fire.

The food, as usual, gave out before the elves were really done with the battle. They could go on and on and on with the food fight.

The Halloween Party overall is a high-energy event. It is the goal to send everyone home really tired – so that they get good sleep. It is also designed to be a lot of fun and laughter is something Santa says he wants to hear from events like this. Everyone laughed a lot at the party and you could tell it was good.

Today there are calm smiles everywhere. Folks are sharing pictures and videos. Some are already making big plans for the next Halloween Party.

We hope your Halloween was fun and left you with lots of smiles, too.