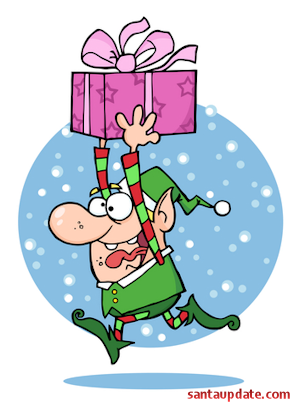 Huge shipments of wrapping paper have been arriving at the North Pole today causing confusion in the Wrapping Department. Elf Wally said “I have no clue why it’s here and where it is going to go.”

Elf Bruno, who is Wally’s chief assistant in the Wrapping Department didn’t know what to do with it. “The wrapping department’s storage room is full right now. We have plenty of paper on hand to get us through this season.” Bruno said.

Santa said “I didn’t order it and I’m not sure who did if Wally said he didn’t.”

As I was headed back to the newsroom I ran across Mrs. Claus looking at the paper. “Isn’t it lovely?” she said. “I ran into the Castillo family while in Acapulco for the elf convention and they make this beautiful homemade wrapping paper. I thought it would go great with the new dolls that the workshop is making this year. So I ordered all that they had.”

I told her of Elf Wally’s storage concerns and she said not to worry. “I have already talked to Elf Billy and he said that he has plenty of room to store it on the first floor of the radar tower.”

So there you go. Mrs. Claus had it handled the whole time and there was never anything to worry about.

Santa Tracking Starts This Week — Are you ready?