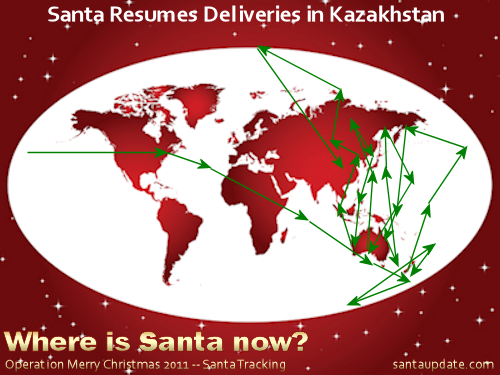 Santa left the North Pole a little while ago and we’re starting to get reports out of Kazakhstan that he has started deliveries there. As Santa continues to push west we can see he remains on a good schedule.

But the problems with Santa’s deliveries stem more from the North Pole than from Santa, his reindeer or the sleigh. In the past hour Santa has marshalled the elf forces not only at the North Pole but also around the world to help in the merry effort. At this moment elves stationed in locations where Santa has already delivered (such as the South Pacific, Australia and parts of eastern Asia) have been summoned back to the North Pole to help.

For some reason — and we don’t yet know why — Santa is utilizing every old sleigh at the North Pole and just about every reindeer who is old enough and strong enough to fly will fly tonight for Santa. We will keep you posted.

Santa Works the Heart of Asia
Scroll to top