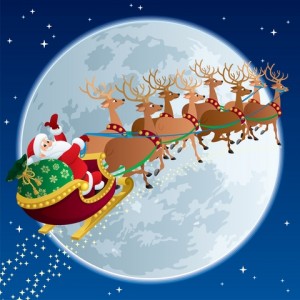 Snow is piling up to record amounts at the North Pole. Drifts in some places have so far exceeded 20 feet. Elf Billy in the North Pole Weather Center says the wind has been a bigger problem than the snow. He said only about 28 inches have actually fallen here since the storm began. The real snowfall, he said, is yet to come. But the problem is not with snow. It is with wind.

Elf Quinton is getting concerned about Santa’s sleigh. “Wind is the most difficult thing Santa has to worry about,” Elf Quinton said. “And wind is everywhere. We have it here this week but next week Santa could be working against wind in the tropics. That is why testing the sleigh is so important.”

Santa himself is not available to test the sleigh right now. In fact, he rarely is at this time of the year. He won’t return to the North Pole for several days. Usually Elf Quinton and others test the sleigh in the days leading up to Christmas. But with the weather being so bad that flight time has not happened.

“Santa and I talked about it and he told me not to worry,” Elf Quinton said. “But I can’t help it. It is a big responsibility. Santa’s sleigh just has to fly. Without a working sleigh, what would Santa do?”

The weather is also holding back a few other things at the North Pole, too. The mail, for example, has not come since the end of last week. “There is going to be a big pile to go through once this storm blows through!” said Elf Hugo, who like the others from the North Pole post office has been helping out in Santa’s Workshop. “Santa will have to work extra hard to read every letter!”

The good news today from the North Pole is that Elf Dr. Lionel P. Spock says all signs of the Bah Humbug Virus have completely disappeared. “We’re 100% healthy,” Elf Lionel told me. “I might just go help in Santa’s workshop, too.”