Santa is outside the city of Kittila in Northern Finland and he may be there for a little bit. He is changing his reindeer once again, going back to the team he started with more than 15 hours ago — Dasher, Dancer, Prancer, Vixen, Comet, Cupid, Donder, Blitzen and, of course, Rudolph.

“They should be good to go for the rest of the flight,” Elf Victor assured me. “They had a good long rest. Santa wanted the speed team through the Middle East and now that part is done he thinks the A-Team can handle it from here on it. It has been a good flight so far.”

Helsinki and Warsaw have reported Santa’s visits since our last update. 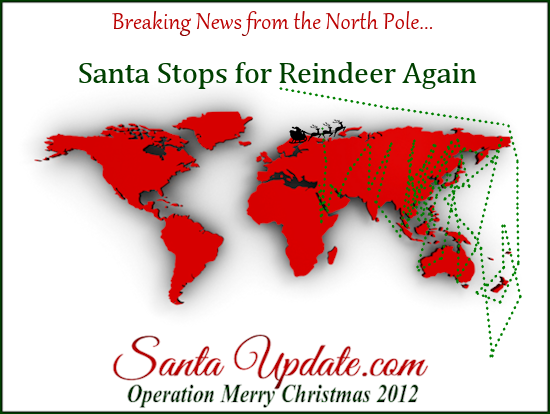 Kids in these places should be in bed by now:
Greenland
Iceland
All of Europe
All of Africa