BREAKING NEWS: Santa Claus has officially launched from the North Pole on his Christmas Eve ride. The world now awaits reports of his first visits of Christmas 2012.

This is the first time in several years that Santa has launched on time. Past flights have been delayed by weather or sleigh problems. But things came together at the last minute this year and Santa begins his Christmas journey on the right foot.

Elf Billy cautioned that it would be a while before the first reports of Santa’s deliveries are announced. “You’ve still got a lot of kids up in a lot of countries of the southern hemisphere,” Elf Billy said. “It is summer time for those folks so there is a lot of late night activity there because that is the cool of the day. Besides, Santa has a long way to go to get there, there are things to check on the sleigh and some other things he might want to take care of before he makes his first stop.”

We will keep you up to date. 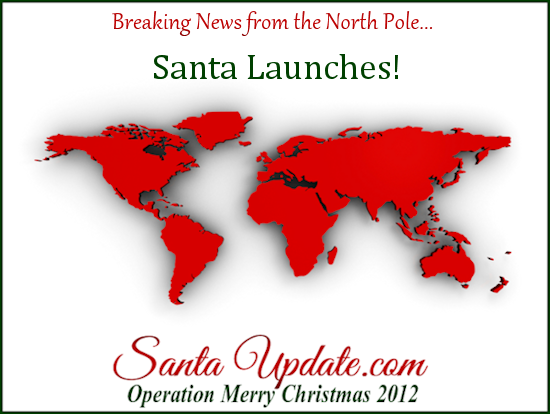 Kids in these places should be in bed by now:
New Zealand
South Pole
Samoa
Kiritimati
South Pacific Islands