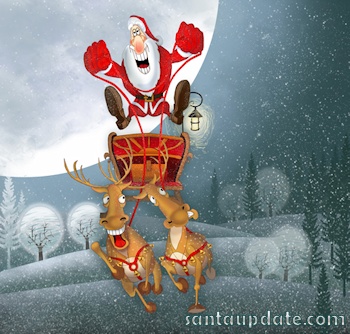 A question came in for me the other day asking what it would take to catch Santa in your house on Christmas.

Well, kids, I will tell you. You can try — but you’ll never catch Santa.

There are lots of fancy video cameras and even apps you can get online these days that claim they can catch Santa on video. And if they are good, indeed, they might work.

The problem is speed. Santa works at such an incredible speed that to the human eye it is impossible to see him. He’s just that fast.

How is this possible?

Well, we’ve asked Elf Ed Zachary for an explanation. If anyone can make sense of how it all works, it is Elf Ed. He has promised to take on the issue in an upcoming article.

That being said that Santa doesn’t always work fast. Some times he takes his sweet time of things. We have heard stories of Santa being in a home a Christmas and folks seeing him stuff things in stockings or placing things under the tree. When that happens I can tell you that Santa either allowed it to happen or intended it to happen. I would imagine the circumstances are different for every home and every believer out there.

But just don’t try to stop Santa or catch him because you never will. If you want to see Santa and talk to him while he is at your house just ask him. Leave him a note in your stocking or something or write Santa a letter. You never know — sometimes the answer is “yes!”.

How to Track Santa on Christmas Eve Elves Put the Final Touches on Lights
Scroll to top
%d bloggers like this: