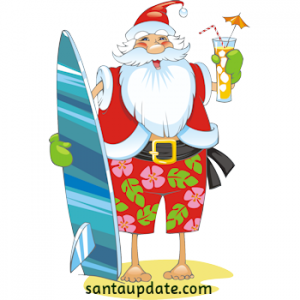 It is Christmas Eve day in the deep South Pacific. Someone in that part of the world will see Santa first.

We have reporters working in several locations and if you’re listening to Kringle Radio you can hear their live reports to the North Pole newsroom.

Remember that it is summer time to these people in the Southern Hemisphere so today will be a day of not only anticipating Santa but of riding bikes, playing at the beach, and maybe going for a swim.

Over on Kringle Radio, Reporter Rusty Belz checked in with Elf Bruno, who is working a tracking station for us in New Zealand. Click the image below to hear his report: