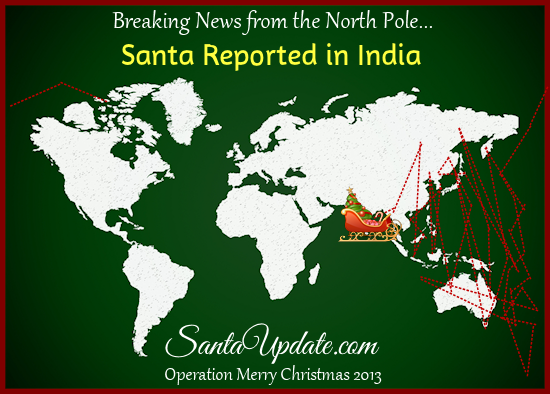 Santa is in India now as several cities there have already reported a Merry Christmas.

Meanwhile, Elf Agent X in the last hour has sent out a notification of a need for more secret spies — elves-in-training, we call them — to help Santa on this flight TODAY. Frankly, Santa needs more eyes on the ground and reports from the following areas: Eastern Canada, Mexico, Venezuela, Brazil, and all over the United States. The following cities are a real concern: Montreal, St. Johns, Augusta, Boston, Jacksonville, West Monroe, Knoxville, Cleveland, Topeka, Dallas, Guadalajara, Veracruz, Caracas, Sao Paulo and all cities in New Jersey.

Sign up your friends and put them to work as elves for Santa!