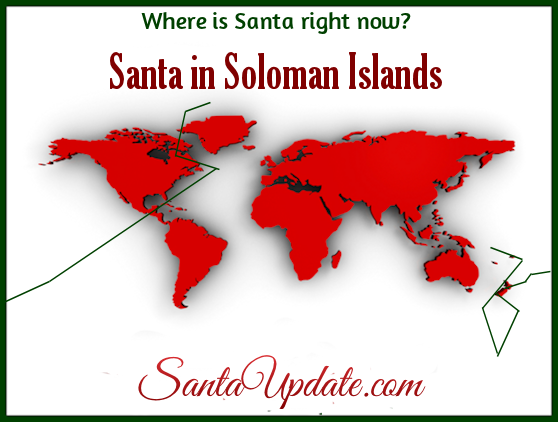 The Soloman Islands appear to be Santa’s current stop. The Tracking Center has confirmation from multiple sources that Santa is there.

Meanwhile, the hundreds of sleighs in the skies over the South Pacific has trackers of all types confused. Santa is tracked by fans all over the world but the ones who are confused aren’t the fans of Santa — it is those who really make a science of knowing Santa’s movements. Military units, governments, aerospace companies, and bad guys of every type track Santa too and sometimes not for good reasons.

It appears all the “extra” sleighs tonight are intended to confuse those who use their own tracking technology to follow Santa. Since we provide detailed information about Santa’s location right here on Santa Update.com Santa feels it isn’t necessary for others to track him with other technology. Especially since he doesn’t know why they really want to track him. So he thought he would make it a little more difficult for them.

From the feedback we are receiving it appears the strategy is working.

Coming up next: News from the North Pole Navy
Hang-Your-Stockings Reminders: All of Asia
Active Bedtime Warnings: Islands of the Bering Sea