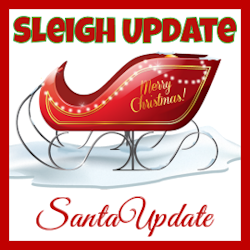 We have reached an important milestone in Operation Merry Christmas 2017 – Santa launches in exactly 100 days!

We have 100 days to get all of our plans complete, from the wrapping to the workshop.

There was a little ceremony today outside the big building that houses the North Pole Research and Development Department. Today is the day when the doors to that building are sealed and they will spend the next several weeks building a new sleigh for Santa from the ground up.

They build a new sleigh for Santa every year.

In fact, the design meetings begin almost immediately after Christmas is over and for months they discuss changes and improvements to Santa’s sleigh that might make it faster and safer.

For months they work on models and prototypes, testing different designs in a giant wind tunnel and meeting with Santa frequently.

But that process has to end some time and at some point they have to actually build the actual sleigh that Santa will use.

It will only take a few weeks to build the sleigh. Then the test flights will begin.

Santa himself may or may not even test the sleigh. He may be too busy. Some years he never even gets in the new sleigh until the moment of truth.