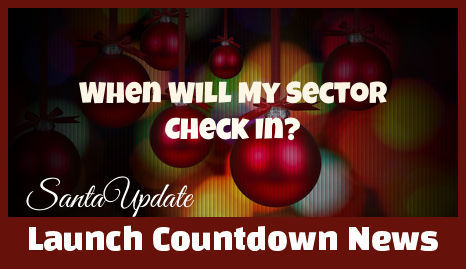 We have had many people asking when tracker check in will be for each sector. I contacted both the support team at SantaTrackers.net and North Pole Flight Command. They both confirmed the same information:

A sector is called to check in about 24 hours before Christmas Eve in that sector.

If that’s true, it could be more than 24 hours before Sector 5, for example, is called to check in. Sector 1, by contrast, begins Christmas Eve in just a few hours. So they will be called first, in order, according to when the clock ticks over to Christmas Eve in their area.

Both sites I talked to urged trackers to wait until they call for check-ins to happen.

They also told me that there will be a general call to check in after each sector is called, just for those elves who are busy and cannot get to it or signed up later.