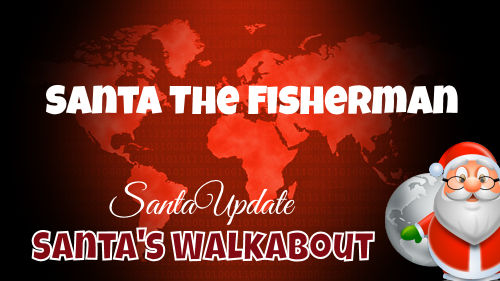 (Special to the North Pole) – Hello from what some call the Great White North. We are still in Northern Canada.

Santa told me when we left that it would take a few weeks for me to become accustomed to walking nearly every day. He was right. It is not as tiring as it was when we began.

But he did not say I would get used to the constant cold. Try as I might, this living and hiking and camping outside during the winter is just something I may never get used to.

Santa does it all without complaining.

We have been gone from the North Pole for about three weeks now and his beard is starting to grow back. It is a thick and heavy beard and I know he grows it to keep warm.

But he has told me he plans to shave again before we meet with people.

Santa has been candid in sharing that our goal of this trip will be to meet many people all over the world. But he has also said it is good for us at times to be alone in nature to think. He says this is always a very important part of a good walkabout.

I understand that. But for me, I like being around people all the time because that means we have easy access to food.

But let me tell you something right now: traveling with Santa in the middle of nowhere means food can be a long time coming.

Santa is a big, strong man. He has legendary stamina.

I get hungry fast. I do not like to wait for food or wonder when it will show up.

There are not many places to find food here in the Great White North.

Since we are walking and we have to carry all of our camping gear we do not carry much food. Santa told me from the very beginning that we would have to find food along the way.

At the time, I was thinking a lot of burgers and milkshakes.

We eat a lot of fish.

It is not fish like you can get at the market. It is fish we have to catch ourselves.

So far, nearly every place we have camped, we have been able to find fish.

Santa loves to fish. He is a very good fisherman.

But it is a cold thing to go fishing every day in the Great White North. While there are rivers and streams running where we can catch fish if we are near a lake they are all frozen over at this time of the year.

I will never forget the first time Santa took me ice fishing.

I had never done it before (I have never done anything like this before. I’m an Elf, not a Boy Scout).

Anyway, Santa just walked out on the ice in the middle of this big frozen lake.

He took out his hatchet and began hacking at the ice. Before long he had created a hole in the ice and we could both look into the hole and see the icy cold water of the lake below.

I asked him how he knew where the fish was.

Santa said that he didn’t know. He said he had to guess where the fish might be and that he could be wrong.

This was late on a very cold day. I was hungry. And I was having visions of a very cold night with nothing warm in my tummy.

I think Santa knew I was afraid of not being able to eat that day. So he started to tease me a little.

“Winslow,” he said. “I could  show you the sure-fire way to get a fish through the ice if only you had a can of peas.”

I told Santa that if I had a can of peas right then and there I wouldn’t waste them on a fish.

Santa laughed and he said, “Yes, you would if you knew that you could catch a lot of fish with a can of peas.”

“How does that work?” I asked.

“It’s easy,” Santa said. “You dig a hole in the ice, just like this one, then you place a ring of peas around the hole.”

Confused, I had to ask him: “How does that catch fish?”

“It’s simple,” Santa said. “When the fish comes up to take a pea you grab him”.

I didn’t think that was very funny.

Santa just laughed at me for not laughing.

Then all of a sudden his line jumped and he brought up a fish. I couldn’t believe my eyes.

Within a few minutes Santa caught another fish. Then another one. Then another one. We were only out there on that ice for about ten minutes and we had more fish than we could eat. In fact, the last couple of fish Santa put them back in the hole, telling the fish to “come see me in the morning”.

Let me tell you something: Santa knows a lot about fish and fishing.

And he knows how to cook fish too.

Our adventure continues. I’m not sure where we are headed for sure or what will happen next. I did ask Santa what he was thinking about the next few weeks and where we might go and he told me just one word.

I don’t know what that means. But when I figure it out, I will let you know.