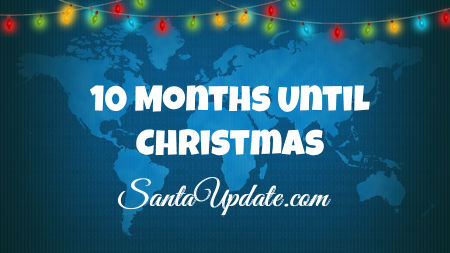 Hello! Today marks 10 months until Christmas and we can’t be more excited.

It’s a pretty busy time. Before Santa left last month he held meetings with Bernard in the workshop. Bernard was surprised at the high goals Santa set. I checked in with the Workshop today and was told that everything is going full blast. They are making things as fast as they would in November right now. Very few elves are on vacation and most are working 6 full days a week — a lot of overtime.

As a result the workshop is getting way, way ahead of schedule.

Maybe Santa meant for that to happen, I don’t know.

All I do know is that it has the elves very excited. They are thinking that if they can get ahead now then maybe November and December won’t be so chaotic for them.

We will see more elves going on vacation in March and April. In fact, traditionally those are the slowest months of the year here at the North Pole. Elves travel everywhere around the world during those months to visit family and to see different places.

In other news we have not had a new letter from Elf Winslow for several weeks. But we expect one very soon. I was told that Santa checked in from somewhere in Nova Scotia over the weekend and they were looking to get aboard some sort of ship. We expect to learn more about that any day now.

There is a lot more going on here right now, too. The reindeer have left for the season, of course, but that has not stopped the work on the design of Santa’s new sleigh. It is happening a little backwards. While the sleigh designers are still arguing over what the sleigh itself will look like it appears that Mrs. Claus has begun work on the new seat for Santa’s sleigh.

You see, when Santa and Mrs. Claus flew back from Hawaii on the return trip last Christmas Mrs. Claus has been on a mission of sorts to improve the seat. Santa liked the seat in the sleigh but Mrs. Claus said it was very uncomfortable. She said it was a detail she would take care of personally.

Apparently she was very serious about that.

She has been down at the sleigh barn every Saturday working on different things to make a new seat for the new sleigh.

We tried to tell her that Santa is very, very picky about the interior of the sleigh. The seat being comfortable isn’t a detail that is important to him because for Santa he is constantly getting into and out of the sleigh on his flight.

So we are a little concerned about what Santa will say when he returns to see what Mrs. Claus comes up with.

This could get interesting.