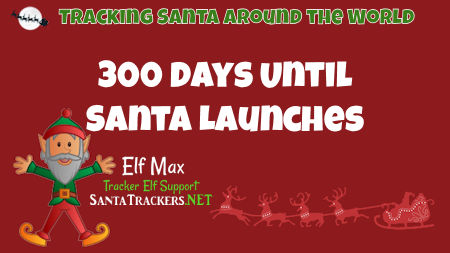 The North Pole Tracking Department recognizes today as a milestone in the countdown to Santa’s launch. Just 300 days remain until Santa departs from the North Pole.

My name is Elf Max and I work tech support for SantaTrackers.net, the official North Pole website for certified tracker elves tracking Santa for Santa.

We provide periodic countdown information through out the year so that you can be fully prepared come launch time. A lot of effort goes into not only getting Santa around the world but in getting enough eyes-on-the-skies out there to help him. Santa had more than 24 million tracker elves last Christmas. We expect he will want more this year.

It is still very early in the year. The new sleigh for Santa’s flight this year is still in the design phase. We don’t know the exact time table yet for the new sleigh but we suspect they won’t even begin to build the new sleigh for several more months. Keep your eyes to this site for information about the sleigh development.

But there is much more going on behind the scenes here at the North Pole to prepare for tracking Santa this year.

Official announcements have not yet been made but I can tell you that in the coming months you will hear about new website tools that will be made available for official Santa trackers. If tracking Santa for Santa is something you might want to do, we humbly suggest you head over to SantaTrackers.net right now to sign up and start your training. It is free, of course, but it will require some of your time to get trained on how to be an elf. Everyone who tracks Santa for Santa has to be an elf. You will be reporting to the North Pole, especially when Santa is in flight.

Santa trackers who track Santa for Santa help Santa get around the world by providing information FROM YOUR NEIGHBORHOOD prior to launch. Santa uses this information to make a more timely and safe flight. Your work as an elf in this capacity is very important.

Of course, you could just track Santa without being an elf. But that would mean you wouldn’t get official North Pole information about his flight and would be subject to getting that data from inferior sources such as news websites, government and military websites, etc.

We hope you stick with us for the countdown and become an elf.