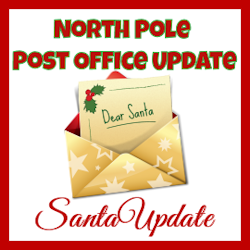 New struggles have emerged at the North Pole Post Office in just the past couple of days since our last radio report from there. Elf Hugo says the volume of mail and messages for Santa especially have nearly doubled in just the past two days.

We sent our radio news team back to the Post Office to see what they could learn. You can listen to their report in the player below.

Elf Hugo wants to make sure we share this news responsibly. He said that while they have become much busier than they were just the other day it is still okay to send letters, messages and notes to Santa. He said it is a good reminder than doing it online would be much faster than trying to send them via regular mail.

And just to keep down the questions, Hugo said “no”, it’s not time to institute Stocking Mail.

Stocking Mail, if you’ll recall, is the utilization of your own Christmas stocking as a mail box. When Santa approves of its use, all you have to do is write out a note to Santa, put it in your stocking and that message automatically gets sent to the North Pole.

It has been a very useful feature in the past but it comes with some issues that make it sometimes unreliable. We have it on strict instructions not to use it unless Santa says so.

Neither Santa or Elf Hugo feel that Stocking Mail is needed at this time.

Elf Sandy Claus to Chat About Becoming an Elf