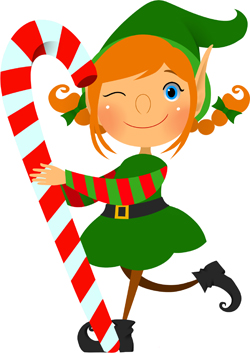 Elf Sandy Claus of the Department of Elf Resources will make her North Pole Chat debut today at 5pm EST.

The Department of Elf Resources is the power behind another Official North Pole website known as ElfHQ.com. The point of the site is to help those believers who want to launch an elf career.

Becoming an elf is not hard. But it does require one to learn the Elf Code and to take the Elf Oath. These are very serious endeavors.

Elf Sandy will be in chat to answer questions for anyone who is in the process of becoming an elf. While we try to get folks to look into this early in the year the week before Christmas every year is by far the busiest time for recruiting new elves.

Elf Sandy gets lots of questions about her name. And here is the truth: no, she is not related to Mr. or Mrs. Claus in any way. Here name is merely a coincidence.

Nevertheless she gets a lot of kidding about it at the North Pole. Elves tease a lot. But Elf Sandy seems to take it in stride.

Elf Sandy is from Germany, where she grew up with 4 siblings — all sisters — and where she went to school. She worked for many years for a German automobile manufacturer before applying for the Department of Elf Resources job at the North Pole. She was shocked to win the job but Santa told her when she was hired that she was always on the Nice list.

Sandy misses her family but travels frequently to Germany to visit.

Elf Sandy is single, living in a cute gingerbread-style home on Candy Cane Lane at the North Pole with her dog Bluto and a cat she calls Misty.