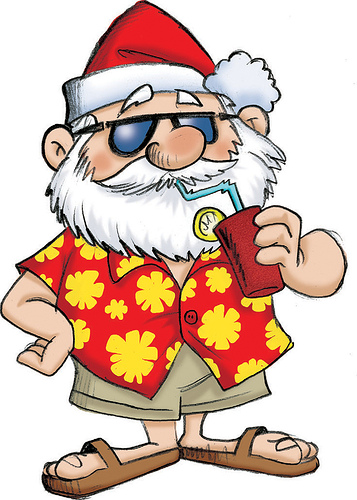 Santa and Mrs. Claus took a sleigh down toward the Canadian/U.S border over the weekend to meet with a group of elves from Canada. From there Santa planned to leave immediately after a meeting to take Mrs. Claus “somewhere warm” for a few days.

This is a very rare thing for Santa to do. He’s usually very busy this time of year helping in countries that usually have winter activities at this time. Because the reindeer prefer the cooler weather, Santa will concentrate on places like Argentina, whose high altitudes often experience terrible winter weather in months such as August. Santa will travel from village to village, handing out food, snow shovels and warm blankets.

But he came home to the North Pole late last week to check up on things and to pick up Mrs. Claus. They stopped by the Canadian elf group to discuss their canned food drive scheduled in October in Ontario. After that meeting, Santa quickly changed from his suit to his summer clothes — ready for some fun in the sun.

Then he did something very unusual for Santa. He got in a car and drove to the airport and got on an airplane.

“Well, that’s what normal people do when they go on vacation,” Santa said. “I can’t just hop on a sleigh and fly down to Galveston. People would see me and the reindeer and the sleigh and we’d end up working the whole time. No, I promised Mrs. Claus a little break together and we’re going to go like regular people and shop and eat and swim and probably get a really good sun burn!”

Even though Santa is taking a break he will keep his cell phone with him so that if we need him at the North Pole we can call him. But we promised him that this week there would be no emergencies.