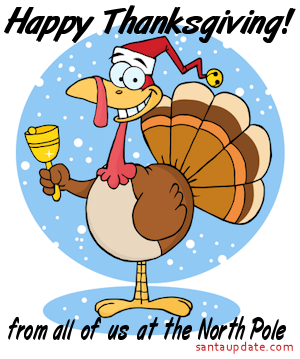 As we celebrate thanksgiving here at the North Pole we are reminded of what a tough year it has been across the globe this year. Many areas of the world have suffered damage from terrible storms. There have been earthquakes. And many, many people have been displaced from their homes because of job problems or unrest. With all of this in mind Santa has decided to declare a Season of Thanksgiving.

Happy Thanksgiving from all of us at the North Pole!