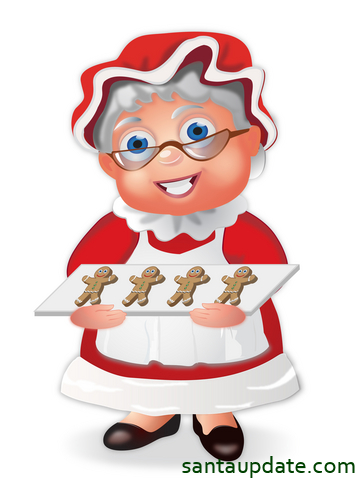 There are rumors here at the North Pole that Mrs. Claus is going to reveal her sugar cookie recipe. Mrs. Claus sugar cookies are legendary. The elves consume them by the ton every day. Only Mrs. Claus knows the secret recipe and she makes the dough every day from scratch. The kitchen staff is not even allowed in the kitchen while she’s mixing it up. The elves have been spent years trying recipes from all over the world trying to find one that even comes close to Mrs. Claus’s. To see if the rumors were true I tracked down Mrs. Claus.

“Reveal my secret recipe?” She said. “Now why would I want to go and do that?”

So I asked her if she could at least give us a hint as to what makes her cookies so special. “I make them with love.” is all Mrs. Claus would say.

She then gave me a wink and turned around a walked away. So there you have it. If you want your cookies to turn out as good as Mrs. Claus’s, make them with love.

Elsewhere around the North Pole things are hectic. Elf Bernard says the workshop is starting to fall behind. “We are running at full capitacy but we’re just not producing fast enough. If things don’t start going smoother we could be in real trouble.”

Elf Wally says the wrapping department is on schedule for now. “We’re okay right now but the farther the workshop gets behind the harder it’s going to be on us. It might take a herculean push but we’ll get it done.”

Elf Hugo says the mail room is caught up for now. “We’ve made it through the initial rush of letters and now they are starting to come in a steady stream. As long as we don’t see another surge in regular letters we should be okay. Stocking mail and emails are a whole lot easier to sort so we are doing fine with those.”

Elf Billy and Elf Quinton have been working on a new GPS system that will allow the tracking department to keep track of Santa even at high speeds. “It’s not ready to be our only way of tracking Santa but it will be a great back up this year.” According to Elf Billy. “We plan on trying it out on a longer test flight this week to see how it holds up. Then we will make a final decision if it will go on the sleigh this year.