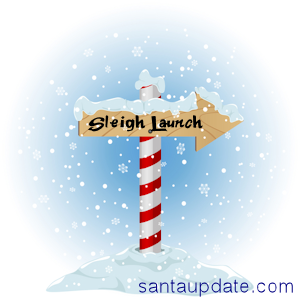 This news that Santa was up has unleashed a stampede to the Sleigh Barn. Folks are crowded all around inside the barn, up in the loft and around the perimeter of the building. It is a large building, capable of holding several hundred reindeer and several sleighs but at this hour it is filling with elf families who are going to see Santa hitch up the sleigh.

Snow is swirling in high winds outside and it is almost impossible to see in the darkness here. There is no way that folks can gather around Santa outside like they usually do.

The doors to the sleigh barn is open and Elf Quinton’s team has the sleigh under bright lights. They are attaching the sleigh bells still while Elf Victor works to get the reindeer hitched to the sleigh. It is an impressive site to see. We haven’t seen Santa yet, he is down in the basement getting the final touches put on his suit by Mrs. Claus.

We will be launching before too long.