Mrs. Claus has left the North Pole on a sleigh pulled by four reindeer, moving south at a very rapid pace.

It isn’t unusual for Mrs. Claus to leave the North Pole on this day. She usually joins Santa on the last leg of his flight, most often when he is in Hawaii. But rarely does she ever leave this early. She left a little while ago with a picnic basket on her arm.

“I don’t know what she’s doing,” Elf Billy said. “But I’d bet she’s taking Santa some lunch. We all want Santa to put on the brakes a bit but Mrs. Claus is the only one who can really make that happen.”

Indeed, Santa is ahead of schedule now. His sleigh this year is just too fast. 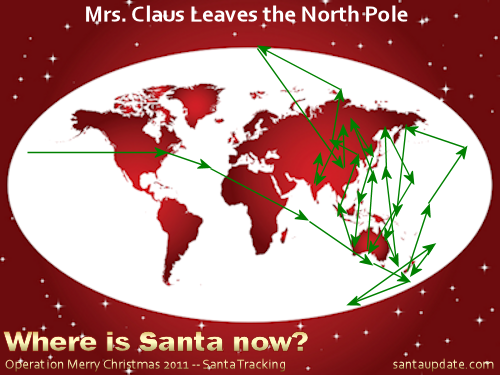