After briefly crossing the Sea of Okhotusk Santa met with Elf Victor who was standing by with a replacement team of reindeer. Joining Santa now on his merry flight is Racer, Pacer, Speedy, Francis, Gordy, Queenie, Holly, Thor and Mickey. Taking a break is Dasher, Dancer, Prancer, Vixen, Comet, Cupid, Donder, Blitzen and Rudolph.

Up here at the North Pole Christmas Eve party there was a gasp that went up when Thor and Mickey’s name were announced as replacement reindeer for this portion of Santa’s flight. Both are previous winners of the Reindeer Games up here at the North Pole and this is the first time in history two previous winners have been on the same team at the same time on Santa’s flight. In the world of reindeer it is considered a very high honor to fly with Santa on Christmas Eve. In fact, it makes them legends. So this is a historic flight today in more ways that one! 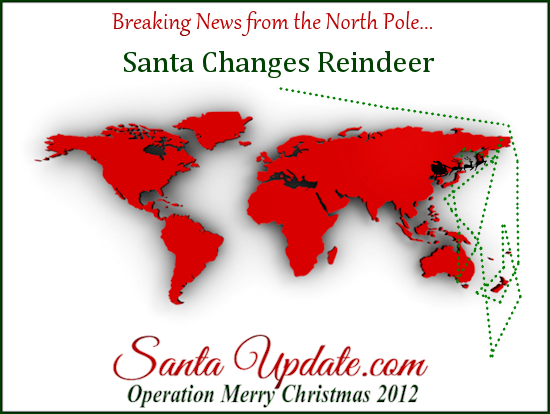 Kids in these places should be in bed by now:
All of Asia