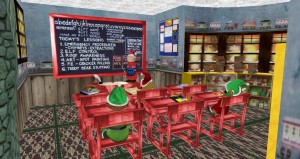 It is just four months until Christmas Eve! Where does the time go?

It is back to school time for elf families and their children this week. Like many kids around the world the kids that live at the North Pole are heading back to school, too.

What? You didn’t know there were children at the North Pole?

Of course there are children at the North Pole. Elves have families just like anyone else. And Santa, of course, has grandchildren.

What? You didn’t know that Santa is also a grandpa?

We actually get letters asking about this all the time. But just because Santa doesn’t talk about it doesn’t mean that Santa doesn’t have a family.

But the big question that always seems to come up when a kid finds out that Santa is a grandpa is “What’s it like having your grandpa be Santa?”

Well, with Santa’s permission and the permission of his parents, I asked Nicholas, one of Santa’s many grandchildren, who is now 11 years old.

Nicholas has a hard time thinking of his grandpa as Santa. To Nicholas, he’s just grandpa.

“Santa is special for me like he is for every kid,” Nicholas said. “But for as much as I love Santa I love my grandpa more.”

Now, before you ask, let me tell you: Nicholas does not live at the North Pole. His father is a road construction supervisor who works in California. Occasionally Nicholas and his family will travel to the North Pole for Claus family gatherings. Nicholas has seen the Workshop, has ridden in Santa’s sleigh and has talked to the reindeer who work for Santa. But he says it is no big deal.

“I get asked all the time by kids who know that grandpa is Santa what it is like at the North Pole,” Nicholas said. “Some people think it is a place where candy grows on trees and Christmas music plays non-stop and that’s just silly kind of movie stuff. The North Pole is just as real as anywhere else. There is snow but not all the time. The sun comes up and goes down, more in the summer and less in the winter. Elves are people. Reindeer are animals. The workshop has a lot of tools. About the only thing that is really magical about it to me is Grandma’s cookies. Those are the best in the world.”

Nicholas never went to school at the North Pole. However, my kids do. And it is like school anywhere else. They study spelling and math and science. Mrs. Claus frequently volunteers at our local schools here at the North Pole, helping young elf kids to learn to read. Santa even occasionally finds time to help fund raise for the local volleyball team.

For those of us who work for Santa and who are working to get ready for Santa the day our kids go back to school triggers a burst of energy in our efforts. Christmas is getting closer! And like many of you we count down the days to Christmas, too.