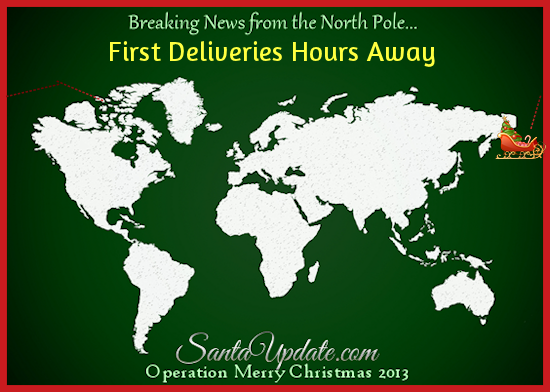 While Santa is in the air and while bedtime warnings are being issued now the Command Center here at the North Pole warns that it will be several hours still before Santa’s deliveries actually begin.

Not only does Santa need to wait until kids go to sleep but he needs to figure out local weather issues and how they might impact the reindeer. Because the sleigh is so heavy early in the flight and because Santa spends so much time in warm climates so early in the flight he has to pace the reindeer to keep them from getting too tired.

In addition, Santa’s Post Office is still receiving and responding to wishlists coming in at the last minute. Santa has to sort his lists, see what he has in inventory with him and make sure he has what he needs before he begins the speedy delivery process. It’s all very complicated and I don’t know how Santa sorts it all out.

So there is much to be done still. We will keep you posted.