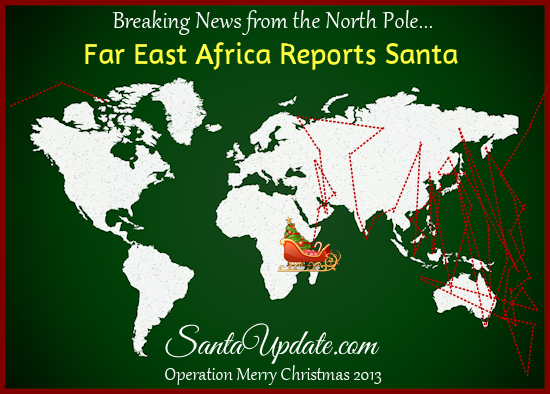 As night begins fall over most of the Americas Santa is pressing on in East Africa, where he just made his first deliveries. Mogadishu has just reported and we’re hearing rumors that Addis Ababa is soon to report that Santa has been there.

Loud cheers were heard at the North Pole Christmas party as Santa entered Africa for the first time on this flight. This is officially the earliest Santa has ever entered Africa on his Christmas flight and Elf Lorraine at the North Pole won a sugar cookie bet by predicting the time closest to Santa’s actual arrival in Africa. She missed it by less than 30 seconds, an amazinng prediction that gained her an extra 150 sugar cookies.