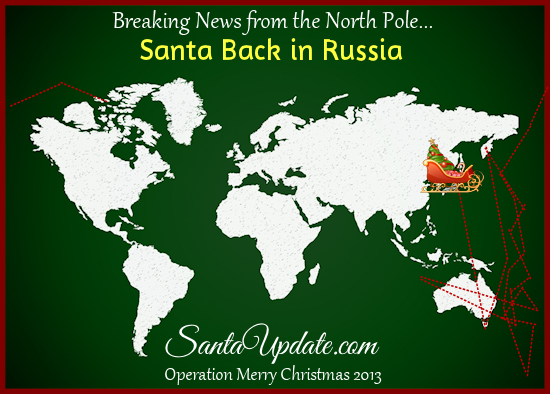 A quick visit to Vladivostok has made people there very happy where it is Christmas morning for them. And it is also a temporary home for Santa’s reindeer, who will be resting there for a while. Santa has changed reindeer, driving now a team made up of Daisy, Fluff, Snowball, Butterfly, Peaches, Angel, Francis and Shirley. I don’t know much about this team of reindeer, as they are new to Santa’s flight squad. I will try to find out more.

Meanwhile, Elf Victor tells me that Dasher, Dancer, Prancer, Vixen, Comet, Cupid, Donner, Blitzen and Rudolph will rest for a while, take a brief nap and then will be repositioned likely somewhere in either Russia, or Finland or maybe Switzerland so that they can rejoin Santa later in the flight. They are not happy, he tells me, to be out of service at this time.

Curiously, Santa has also switched sleighs and is now flying his newest sleigh, dubbed now Gracie 2. We don’t know why he is doing this either as the old sleigh seemed to be flying perfectly. As we find out, we’ll keep you posted.