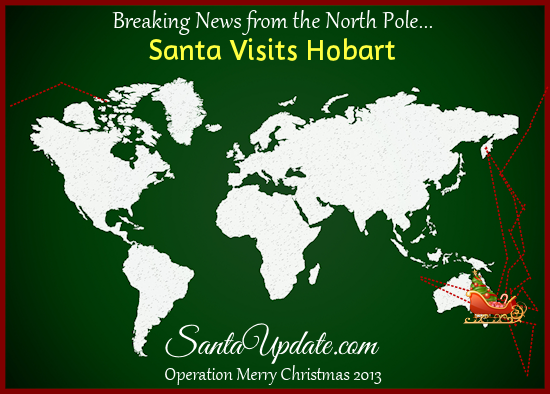 Santa continues to work in Australia at this time, we recently heard from the city of Hobart.

Santa pretty much has no where to go but north right now. He could head into Indonesia or perhaps shoot back up to Siberia, or maybe even towards Japan. We don’t know for sure, it is up to him.

We are beginning to get mail and lots of questions from kids in the Americas now, as many of them are already awake. We will attempt to answer your questions through out the news today.

One of the questions we received was about Santa’s secret spy reports. Ben H. from Little Rock, Arkansas, USA wants to know if he puts in a secret spy report if it goes right into Santa’s sleigh. I asked Elf Agent X that question and he explained:

“We get reports from all over the world. Santa only needs information for the area he is visiting now or will visit soon. He doesn’t need info on Little Rock because he won’t be there for another 20 hours or so. So we take each report we get and we file it according to time and location. Then, as Santa gets closer to a location we feed it the sleigh where he can see it. For example, right now, Santa is in Australia but will be in Japan very soon. Everything we have on Japan is headed his way right now. He will read it as he goes along. It is a good system.”