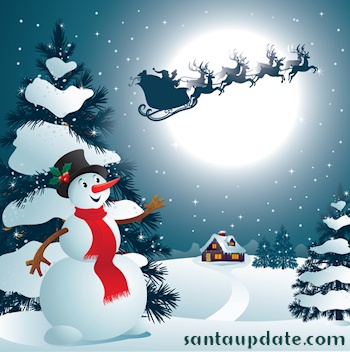 Can you believe it is just eight months until Christmas Eve? The time is flying!

Speaking of flying things are really happening now with Santa’s new sleigh for 2014. Elf Quinton had Santa over to the Flight Center to look at new designs and this year Santa came up with a new idea that he isn’t sure is going to work.

By making the runners longer Santa can improve his flight speed by a large percentage while making it less work for the reindeer – meaning they can go faster and fly further without stopping to rest.

The problem is that long runners make it almost impossible for Santa to land in some places.

That is always a problem in big cities and Santa’s sleigh has to kind of hover while Santa visits. That’s okay and it happens a lot but hovering can tire out the reindeer, too. So Santa’s sleigh cannot be too long either. Santa wants to actually land the sleigh as much as possible.

At this time of the year Santa and Elf Quinton will play with a lot of designs.

They will build and rebuild several sleighs before they settle on a design. After the design is settled they start playing with materials – what the sleigh is actually constructed with. Sometimes it is wood, sometimes it is metal, sometimes it has fiberglass or plastic – it just depends on the design. This all takes a lot of time.

It might be several months before test flights of the new sleigh actually begin.

You can be sure that we will be ready come Christmas. Somehow it always happens.

Happy Spring to everyone!