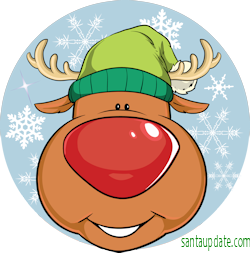 In discussing Santa’s sleigh with Elf Quinton in the past hour he shared some more information with me I did not know.

This new sleigh is not only the biggest Santa has ever flown it is also the most technologically advance vehicle ever built.

The sleigh is powered by reindeer, of course, and Santa wanted something new to help them stay cool. They do fine a high altitude and cool climates but when they go down to the Southern Hemisphere where it is summer time they sometimes can get a little too warm.

For lack of a better term, Santa wanted air conditioning for them.

Elf Quinton explained that the sleigh is equipped with water filled harnesses and lines that are computer controlled to not only release moisture into the air surrounding the reindeer but also to provide cool water for them upon demand. That means no more having to stop to take a drink.

The system has performed very well in test flights so far.

Coming up next: Rumors of a major announcement

Where it is Christmas Eve now: Vladivostok, Russia

Listen to a Santa tracker in Germany interviewed by the North Pole News Team: