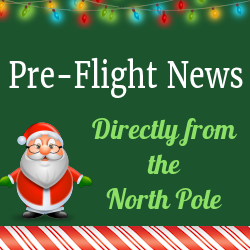 It has become an annual Christmas Eve tradition — it is the final test flight of Santa’s sleigh and they are getting the sleigh ready now to take off on that journey.

The sleigh, of course, has been in flight testing mode for months. The elves over at the Sleigh Barn have sent test pilots all over the world in all kinds of weather putting Santa’s Sleigh this year through the paces. The early word on Santa’s new sleigh for this year is that it is fast — very, very fast.

The final test flight is important because it is the most aggressive flight the sleigh takes. Only the best test pilot is chosen to fly this one last flight.

The final test flight isn’t just for the sleigh. It is also a dry-run for the regional tracking centers set up by the North Pole around the world and for the many millions of Santa trackers and tracker elves out there who are looking to sharpen their skills.

We provide coverage of that last flight right here on Santa Update, but also maps of the final test flight journey at Tracking Santa.net and technical information of the sleigh’s performance through the North Pole Flight Command Center.

Keep tune right here for more details about when that flight launches.