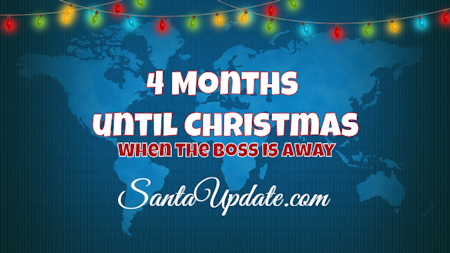 Hi everyone! Today marks the 4 month mark until Christmas. Only four months until Santa flies! Unbelievable!

You wouldn’t believe how much is happening now at the North Pole — even with Santa and Mrs. Claus heading out on vacation. Santa, as you know has been hard at work almost from the minute he returned from his last Christmas flight. He has been supervising the construction of the new tracking center, he has been very involved in the design of a new sleigh, and he has been busy working on what he calls some “super top secret projects” that he has planned for someone this Christmas.

But he put a stop to everything a couple of weeks ago and packed up the sleigh. Along with Mrs. Claus he left in shorts and flip-flops stating it was time for a “tour of the world’s best beaches”. We have not heard from him since. We hope he is having a nice time.

I am not sure of his actual date of return but I see his name on the calendar for a couple of meetings, starting the middle of next week.

But with all this stuff going on there has also been some goofiness, too. When the boss is away, the elves tend to play. Last week was “dress like your favorite reindeer” day at the workshop. You had elves working while crawling around on all fours and poking each other with their “antlers”. They had fun but most know that if Santa was here he would not have allowed that in the workshop and would have told them to take it outside.

We also had our annual water balloon fight, an kind of end of summer event. As usual, we had elves who filled ballons with things like jello or kool-aid. The colors were pretty but it sure made a sticky mess of things.

And of course, with Santa gone, there has been the endless game of elves deciding they are in charge.

That is sometimes a problem. After all, after Santa, just who is the most important elf at the North Pole? Is it the guy in charge of the reindeer or the workshop? Or the elf running the radio station, the newspaper or the candy cane maker?

It is a good reason for us to hope that Santa comes home soon!

3 Months Until Christmas
Scroll to top