After a final walk around the sleigh, Santa climbed in and gave the reins a gentle tug. The reindeer started off running slowly but quickly gained speed and lifted off. Santa steered the sleigh to the left and waved down to the cheering crowd below. Then after two complete laps of the North Pole he yelled out Merry Christmas! and took off like a bolt of lighting into the snowy morning sky.

After Santa was gone all of the crowds packed up and headed over to the Claus residence for the annual Christmas party. Elf Billy’s team has set up several large computer monitors there that will display all of the tracking info in real time so the elves can follow along. There is also a live video feed straight from Santa’s sleigh and real time audio from his radio. Both of those feeds have a tendency to break up though when Santa reaches some of the more remote areas of the world.

Operation Merry Christmas 2011 is now in the delivery phase. Look out world, Santa Claus is coming! 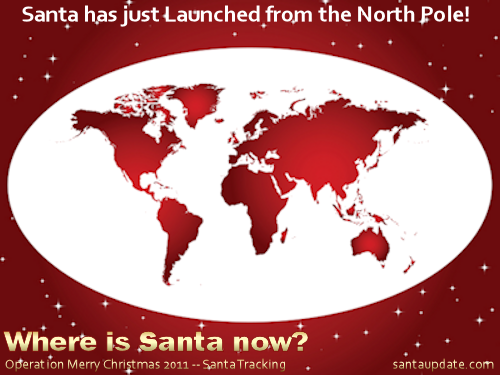