As Santa pulled into a frozen mountain meadow in northern Russia he called in to Elf Quinton to report a problem with the sleigh. Evidently he hit a tree coming in for a landing and didn’t see a cell phone tower sticking up in the middle of it. They often place cell phone towers near tall trees to disguise them but this tower had no lights on it and Santa didn’t see it. None of the reindeer were hurt in the accident but the rear underside of the sleigh took a hit, affecting the ride of the sleigh at high speeds. Santa says the sleigh will need to be repaired or replaced in order for him to continue.

Thankfully, he’s taking a bit of a lunch break with Mrs. Claus at the moment and there is time to get that taken care of. We’ll keep you posted. 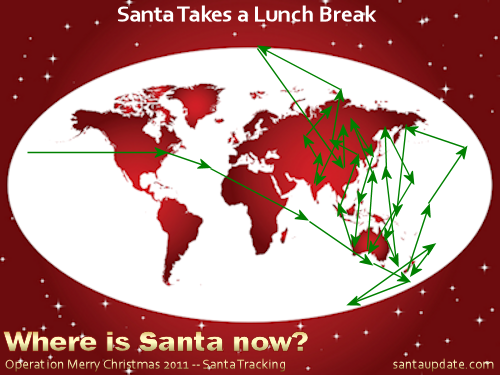